As part of my National Parks Tour (NPT): Master Traveler Gold quest I am riding to the west coast, doing an imbedded IBA challenge ride, ending up on the east coast.  This three legged adventure is an opportunity to practice some long distance riding, a stint of hard long distance riding and an opportunity to visit some of the wonderful National Park Service sites on both coasts.

The NPT prizes on this trip are to visit parks in California and Maine.  Scoring passport stamps in these states are required for the Master Traveler Gold certification.  I scored Florida park stamps while attending the Iron Butt Association annual get together in Jacksonville.  Next month I will be riding to Alaska to score a National Park passport stamp thereby reaching my goal of National Parks Tour Master Traveler -- Gold

The ride from home to Roswell went great.  Not much of the big storm that blew through the night before was left.  Was going to stop somewhere around Fort Stockton or Pecos but the ride was comfortable and the weather good. 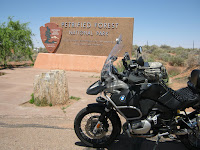 Petrified Forest National Park, AZ
After leaving Roswell I stopped at Cline's Corner for a cup of coffee.  It's been there since the old Route 66 days.  The Petrified Forest NP was very interesting.  Secured two passport stamps for this stop.  Love the geology of the desert.


Hoover Dam National Historic Landmark, NV
Wasn't going to hit Hoover Dam until the following day.  But, I was making great time on I-40 and the weather was good.  So, I pushed on to arrive ten minutes before the Visitor's Center closed.  Crap!  Hoover Dam is not a NP but just part of the Lake Mead National Recreation Area.  Spent the night in the Hacienda Casino, for $54, blew two twenties on the slots after a buffet meal.  Sunday morning I headed to the Lake Mead NRA visitor center about a mile away.  Crap again!  It was closed for renovations.  Going to check to see if my Hoover Dam stamp will qualify me for Nevada stamp location. 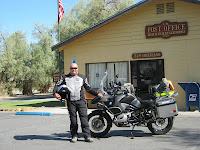 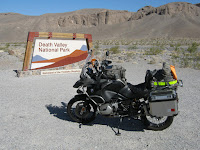 The was my second, or was it third time riding through Death Valley.  Always a spectacular ride though this unique place.  Temps were warm but not uncomfortable.  Only got above 100f on the way out.  Got me a new T-shirt and headed to my next California NP, Yosemite. 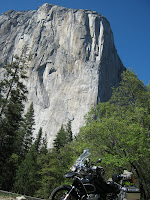 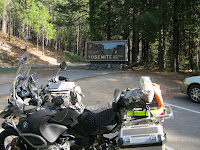 The ride up the Owens Valley was also good.  The view of Mount Whitney over my left shoulder riding on US 395 through Lone Pine reminded me how special California is.  Death Valley is the lowest point in the lower 48 states and Mount Whitney is the highest point.  They are about 100 miles apart.  I entered Yosemite on the east end of the park through the Tioga Pass gate.  The ride to the Yosemite Valley was over the mountains and around the twisty roads.  The park wasn't very crowed for a Sunday.  Guess Mother's Day kept all but the foreign tourists busy elsewhere.  I sent a Spot message when I parked in the Visitor's Center lot but checking later I see it didn't take.  But the pictures I took of my bike and El Capitan bear witness to ride. 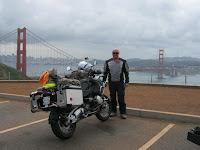 I slept in today, Monday the 14th.  No hurry to reach San Francisco so, hanging out in the motel drinking some coffee was relaxing.  Heading out I stopped to hose off the bike before riding to the northern approach to the Golden Gate bridge.  I've always wanted to ride across this landmark.  After paying the $6 toll I rode to "Warming Hut" to get my Golden Gate NRA passport stamp. 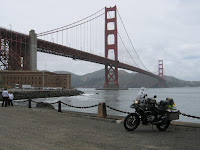 LEG 2:  Operation George Wyman Coast to Coast -- May 15 - 18
Ride from San Francisco to New York City in fewer than 50 hours.   Integral to this 50CC "The Hard Way" challenge ride will be doing another BunBurner Gold, 1,500 miles in fewer than 24 hours.  Remember my ride last week?  It was a prep ride for this tougher IBA challenge ride.