After the repair of my R1200GS Adventure it's time for a shake-out ride.  Back on March 23rd the motorcycle suffered a drive shaft failure.  During the repairs, covered by an extended warranty, I also had the clutch plates replaced as the bike had 123,000 plus miles on the odometer. So, today I'm heading out to one of my favorite places to ride;  West Texas.  I want to put some miles on the motorcycle to get it ready for the service I have scheduled for May 10th.  During May I'm doing about a 7,500 ride to accomplish a couple of Iron Butt Association rides.  More about that adventure in my next blog posting.  And, speaking of mileage....check out this odometer mileage on my GSA. 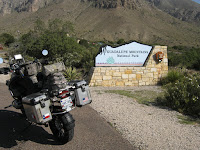 After spending the night in Fort Stockton I headed north to Pecos and the vast desert formed by the Permian Basin.  This geological formation is the bottom of an ancient ocean that formed some 300 million years ago.  I was riding to the northern reef and shore line of Permian ocean, the Guadalupe Mountains National Park.  It's a bit off of the beaten path and not many people take the time to visit the park.  But its spectacular West Texas scenery is worth the ride.  Besides, it's another passport stamp in my collection to qualify for the IBA National Parks Tour Master Traveler - Gold certified ride. 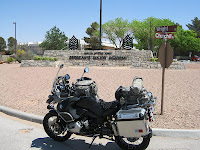 I continued riding west to El Paso.  I wanted to visit the US Army Sergeants Major Academy located at Fort Bliss, TX.  I am a graduate of this military professional development institution attending while I was on active duty.  I graduated with Class 34 in 1989.  I haven't been back since so it's a bit of a ride down memory lane, or more specifically, Sergeant Major Blvd.

Leaving El Paso I head east to Van Horn.  I can't tell you how many times I have ridden I-10 both east and west.  But each ride is an adventure and I enjoy the vast open spaces not to mention the 80 MPH posted speed limit.  I turned off I-10 at Van Horn going south east on US 90 then over to Fort Davis.  Noticed a couple of wild fires in the Davis mountains.  West Texas was hit hard by wild fires the past couple of years and these were not a good sign.


Fort Davis stands unique among frontier forts in that it became the Regimental Headquarters for all four Buffalo Soldier regiments that served during the last decades of the 19th-century. Troopers of the Ninth Cavalry were the first Buffalo Soldiers to garrison Fort Davis. Arriving in the summer of 1867, they reoccupied the fort that had been abandoned by Union forces at the outbreak of the Civil War. In addition to helping construct a new post, they had the responsibility of protecting travelers on the San Antonio-El Paso Road, a segment of the southern Overland Route to California.


I checked into a quaint local motel, enjoyed a TexMex meal and settled in for the night.  After a cup of morning coffee I headed to the super slab.  Stopped in Fort Stockton to gas up and another cup of coffee to go with my Cliff protein bar.  It's 325 miles from Fort Stockton to home near Wimberley.  I didn't stop until reaching home.  What a great shake-out ride.  The bike ran great.  But I did experience an annoying issue with my Spot GPS Messenger.  The "Custom" messages did not register to my account.  The unit acquired the GPS location and emailed the position to the Spot servers but did not text or email my contacts.  I use the "Custom" message to let my contact list know I'm parked for the night or an extended rest period.  I contacted Spot via their customer care site to get the issue resolved.


Here's a SpotWalla Map in case you want to follow along.
Posted by Tim Masterson (HardTxRider) at 8:00 AM No comments: