This was an after-thought adventure.  A couple of Rider Coach buddies and I decided to ride the Tail of the Dragon after the Riders Edge CIW in Memphis.  So, we rode east to the other end of TN.  Deals Gap is a popular and internationally famous destination for riding enthusiasts  as it is located along a stretch of two-lane road known as "The Dragon" since 1981. The 11-mile stretch of the Dragon in Tennessee has some 318 curves. Some of the Dragon's sharpest curves have names like Copperhead Corner, Hog Pen Bend, Wheelie Hell, Shade Tree Corner, Mud Corner, Sunset Corner, Gravity Cavity, Beginner's End, and Brake or Bust Bend. The road earned its name from its curves being said to resemble a dragon's tail. The stretch bears the street name "Tapoco Road" in North Carolina and "Calderwood Highway" in Tennessee and is signed entirely by U.S. 129. State Route 115 is included on maps, and is the name used by Tennessee Department of Transportation for highway contracts.  Check out this map.

We started at the Pumpkin Center on the north end of the Dragon and rode south to Deal's Gap.  Then turned round and head back north for more practice riding the curves.  There were lots of motorcycles, of all types, and many of them were riding a long faster than I was.  I was riding my Harley Davidson Road Glide, which handles like a tug boat in the curves.  My BMW R1200GS Adventure would have been a better ride. 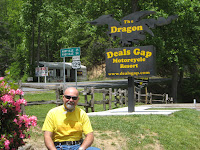 Posted by Tim Masterson (HardTxRider) at 12:00 PM No comments: