Pre-launch staging will be conducted in Muleshoe, TX the day prior to scheduled July 16th departure from Earth.  The route after launch from Earth will pass through Amarillo, TX.  Then through Springfield IL, continuing on to the final destination of Moon, PA.  A distance of 1,511 miles according to the rocket scientists at Bing Cartography.  By doing a IBA Challenge Ride from Earth, TX to Moon, PA one earns "IBAnaut" bragging rights. (see disclaimer below)

BubblerGPS Pro map via SpotWalla Tracking Central.  This map link will show my ride up to Muleshoe, Earth to Moon, and the ride back home.  The map below shows my Spot Gen3 map of the Earth to Moon ride only.

Wednesday, 7/16:  Launch pad was at the Alon station in Earth.  I had previously verified the accuracy of the all important IBA starting dated business receipt, of DBR.  I arrive at 0230 for a cup of coffee to go with my breakfast bar.  Got a backup DBR in the store just in case.  The morning air was very comfortable, in the low 60s.  I put on my electric gear before departing the Muleshoe hotel.

Segment 1 - Earth to PS1:  I launched out of Earth right on schedule at 0300.  DBR was 0257 and I pressed the starting SPOT button right at 0300.  Pit stop 1 was just west of Oklahoma City.  I would ride north through Amarillo then I-40 east.  I had my FLIR system activated to help me detect warm blooded critters along the path of travel.  Good thing too for just prior to Amarillo there was a deer on the I-27.  I was alerted to it well outside the range of my head lights or about 1/4 mile.  By the time it was in light range it had noticed me and was moving erratically.  I scrubbed off speed and waited for it to decide where to go.  The rest of the ride was good with just a couple of rain sprinkles along the way.  Arrived at Pit Stop 1 a few minutes early at 0725, but who's counting?

Segment 2 - PS1 to PS2:  Departing the Oklahoma City area I took a northeasterly route to the towards Tulsa and beyond to Springfield MO and PS2.  By this time the weather had cleared but the temperatures were still on the chilly side.  A cold front had moved through the area the night before and pushed all the hot air to the south.  Segment 2 was uneventful, just good riding.  There were some tolls along this route and I was delayed some at the three pay points.  But, traffic was good and no issues.

Segment 3 - PS2 to PS3:   Ride pace has been good with no traffic delays.  Hit the Springfield MO metro area and arrived at the preplanned station about 10 minutes early.  My goal for having planned stops was not to be a slave to the schedule but to provide me information about the ride pace.  Weather still pleasant with temperatures in the mid 60's.  During planning I picked stations with easy off easy on  locations and did google earth recons for each station.

Segment 4 - PS3 to PS4:  By the time I arrived at PS4 I had been on the move 18 hours having stopped three times for pit stops.  Still, I felt good and no issues with comfort stress.  I arrived at pit stop 4 with a few minutes to linger while off the bike.  I took this opportunity to get shed of the accumulated TexMex and other meals that had been processed.  It is amazing how much better riding is after a healthy purge, LOL.

Segment 5 - PS4 to Moon:  The accumulated miles were starting to wear on me.  My knees in particular were creating comfort stress.  Standing up a few times takes care of this as well as extending my legs out on my highway pegs.  Still, 20 hours in the saddle is a long time.  So, I pulled off at a nice Love's travel center, had a cup of coffee and stretched my legs a bit.  It felt good and the coffee perked me right up for the final trek into Moon.  I turned north near Wheeling WV and did the river road.  Was a great ride even in the dark.  I had my FLIR system on since dusk and it was working wonderfully.  Didn't seen any critters but was amazed at how the large cooling towers and smoke stacks appear in thermal imagery.  I looked like something out of a science fiction movie.

The "HardTxRider" has landed:  Arrive at Moon right at 0130.  Got the clock stopping DBR at the Sheetz station, went in to by some food and rode across the street to the Super8.  Saw Rich's bike parked right out front so I pulled in right beside him.  Got the clerk and her assistant to witness my IBA BBG form.  Another Iron Butt ride in the baggie.  I got up the next morning around 0800 and had breakfast with Rich in the lobby.  Then I headed to the township to find a couple of photo ops.  What an adventure!


Tuesday, 7/15:  Pre-launch staging took place in Muleshoe, TX.  About 20 miles west of the Earth launch pad.   I met up with fellow IBAnauts Rich Rulau and Perry Linn.  Rich was doing a BBG with a 2AM scheduled launch.  Perry's intention was a SaddleSore 3,000 Earth to Moon to Earth.  Rich, Perry and I went to a local TexMex eatery for the traditional IBAnaut dinner.  We got our IBA witness forms documented, with the help of "BikerBill" Bill Norris who rode in from Lubbuck. I entered pre-launch sleep period at 2000 with a 0200 wakeup. 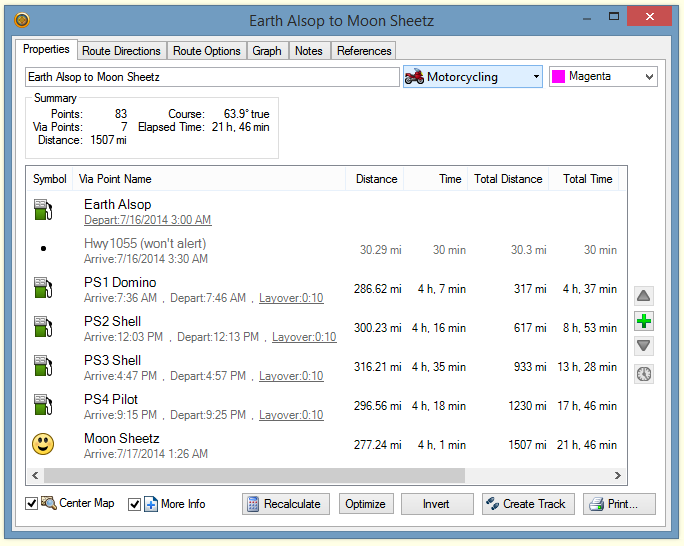 Earth to Moon planning with proposed route and mission profile.  The mission profile contains the time, speed and distance calculations as well as the planned enroute fuel stops.  The mission profile contains the Garmin BaseCamp generated route and anticipated travel times for each route segment beginning at the Earth launch location through to the Moon landing location.  This raw data is then fed into the Rally Leg Plan Tool to time out the entire mission giving estimated times of arrival at all route segments and to the final landing location in Moon.  It can be used to compare planned and actual riding times.

I am planning to complete an IBA BunBurner Gold challenge ride during this event.  It requires me to ride, and document to IBA standards, over 1,500 miles in less than 24 hours.  By choosing to ride a BBG on a specific date, from and to specific locations, means I don't get to pick the weather or avoiding congested areas.  About the only flexibility I get is the departure time and expected waypoint times along the route.  So, this type of BBG is more challenging that the optimally chosen route and day to ride.  If for some reason I don't finish the ride in less than 24 hours I will apply for a regular BunBurner 1,500 which can be accomplished in less than 36 hours.  Either way it's going to be a nice motorcycling adventure.


The return flight from Moon is still in the planning stages.  Of course, I hope to make it an adventure out of that ride.  So, I'll be scouring the space between Moon and my home base for fun opportunities.  Stay tuned.....

OK, here's a fun idea.  Do any IBA SaddleSore or BunBurnner ride between Earth, TX and Moon, PA and lay claim to a "IBAnaut" designation.  Ideally, starting on an anniversary date of any Apollo Mission.  All rides should start from Earth, TX of course, unless you are an eastern extraterrestrial.  Just think of the fun combinations: Disclaimer:  The designation "IBAnaut" is not an official Iron Butt Association label for any ride.  Just my attempt to add a little fun to the event.
Posted by Tim Masterson (HardTxRider) at 6:51 PM